After the Michelson-Morley experiment, aether theory reached a dead end. Having the aether be stationary  with respect to Earth contradicted Maxwell's theory as well as many astronomical experiments; however having it moving with respect to Earth contradicted  the Michelson-Morley experiment. One of the first scientists to acknowledge this problem, and propose a solution to it, was Hendrik Lorentz.

Lorentz proposed that there was only one frame of reference in which the aether is stationary, however he also proposed that the length of objects  moving relative to this aether contracted in the direction of motion. This solution was able to explain the null result of the  Michelson-Morley experiment as the distance the light traveled contracted in the direction of motion of the aether. He first published his theory in 1892, and later on revised it till the early 1900. 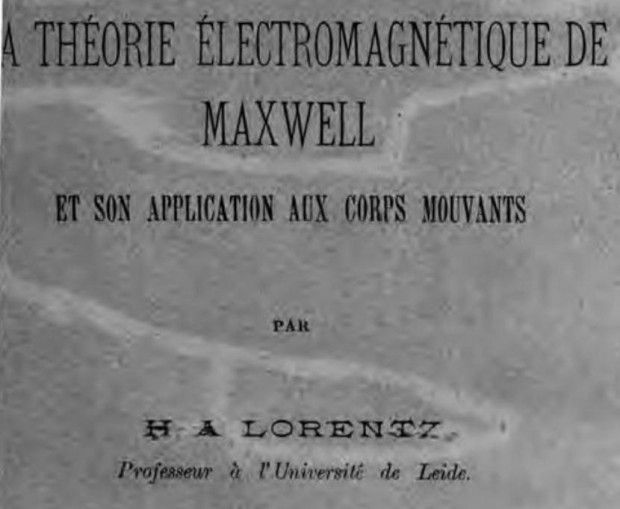 The cover of Lorentz's book. Translation: The Maxwell electromagnetic theory and its application to moving bodies.

To many, this theory seemed like a mathematical trick to fix the problems with the  Michelson-Morley experiment. However the mathematics behind it was breakthroughing. It was a highly complicated theory of aether, that seemed ad hoc. But still its predictions seemed to align with every experiment up to that time. His theory did not rise, due to a different scientist's publication - Albert Einstein.

In 1905 Albert Einstein published one of the most influential  physics papers in history,  On the electrodynamics of moving bodies. In this paper he described his theory of special relativity. This theory brought to an end the theories of luminiferous aether by using the principle of relativity: that the laws of physics are true in all frames of reference. By concluding that Maxwell's equations are a fundamental law of physics, he concluded that the speed of light was the same in all frames of reference. However his mathematical outcome was identical to that of Lorentz's aether theory, and their predictions are indistinguishable. So why did Einstein's theory win in the eyes of history? Because it was simpler - it  presumed  fewer assumptions.

Though aether  theory was discarded, it still played a major role in the development of modern physics, and it paved the way for our current understanding of the world. The theory of the aether shows that even physical theories that are taken for granted can be disproven; and that we must learn to better understand our world, even if that means abandoning the ideas we assume obsolete.